The rain shower originally designed to install on the ceiling above the shower stall is now available. A spa-like feeling you can experience in your own home shower with the use of rain shower heads.

Are Rain Shower Heads Worth It? 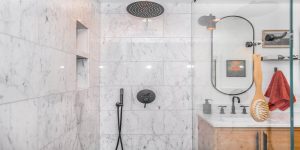 The fixed rain shower heads are similar to ordinary fixed shower heads, but they are significantly larger. They range in size from 6-inches to larger and have more holes in the surface to provide much more coverage in the shower.

A rainfall shower head has functions to suit everyone’s preferences. The key features include a balanced water pressure that, depending on the size of the rain shower head, provides a calming stream of water over a vast area.

You may now purchase the kind, style, and size of shower head to create a soothing, luxurious spa-like bathroom experience at home using the information in this guide on rain shower head advantages and drawbacks.

Before installing one it’s always wiser to gain knowledge of the actual shower head height you should have in the bathroom. 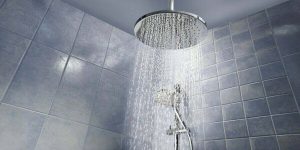 Rather than spraying like a typical shower head, several spray nozzles allow the water to flow or fall. The features you can customize when purchasing a rain shower head listed below:

If you still want a handheld wand in your shower, look for a rainfall shower head that includes one. Look for a design that lets you use the rain shower head and the handheld shower head at the same time.

Adding an LED light in your rainfall shower head to your shower will give it a whole new level. Numerous hues, as well as color-changing and color-fading options, are available.

They might be square, rectangular, or round in shape. Water pressure is the only source of power for LED light rain shower heads; no batteries or electricity are needed.

Installable on the Ceiling

The shower stall ceiling height is also crucial. According to the measurements, the tallest individual using the shower should have 12 inches of clearance from the rain shower head.

Extra-large rain shower heads cover a larger area in the shower. They usually have similar water pressure and cover the entire body at once, so there’s no need to move around to wash or rinse. These are ideal for those with disabilities who require assistance when showering. 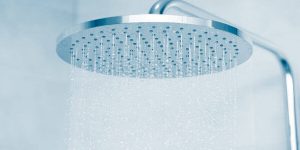 Prices, style, durability, and design vary depending on the finish. The finish you select is determined by the design of your bathroom and shower.

Polished Brass: This gold tone rain shower head finish is a sturdy reproduction of brass. Polished brass was popular in the 1980s and 1990s, but it is less popular now. Because the gold tone is rather prominent, make sure it goes with the rest of the bathroom’s decor.

Brushed Nickel: With a greyish tone and color, brushed nickel is becoming increasingly fashionable. It goes with practically any style of decor and is water resistant.

Chrome: Chrome is a popular finish that never goes out of style. It doesn’t necessarily mean that the rain shower head is made of chrome, but it does have the same tone, sheen, and appearance as chrome. When it comes to purchasing a rain shower head, chrome is the most cost-effective option.

The Benefits and Drawbacks